By agmcarthur in population genomics, publications on January 26, 2015 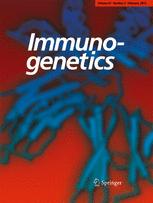 The major histocompatibility complex (Mhc) is subject to pathogen-mediated balancing selection and can link natural selection with mate choice. We characterized two Mhc class II B loci in Leach’s storm-petrel, Oceanodroma leucorhoa, focusing on exon 2 which encodes the portion of the protein that binds pathogen peptides. We amplified and sequenced exon 2 with locus-specific nested PCR and Illumina MiSeq using individually barcoded primers. Repeat genotyping of 78 single-locus genotypes produced identical results in 77 cases (98.7 %). Sequencing of messenger RNA (mRNA) from three birds confirmed expression of both loci, consistent with the observed absence of stop codons or frameshifts in all alleles. In 48 birds, we found 9 and 12 alleles at the two loci, respectively, and all 21 alleles translated to unique amino acid sequences. Unlike many studies of duplicated Mhc genes, alleles of the two loci clustered into monophyletic groups. Consistent with this phylogenetic result, interlocus gene conversion appears to have affected only two short fragments of the exon. As predicted under a paradigm of pathogen-mediated selection, comparison of synonymous and non-synonymous substitution rates found evidence of a history of positive selection at putative peptide binding sites. Overall, the results suggest that the gene duplication event leading to these two loci is not recent and that point mutations and positive selection on the peptide binding sites may be the predominant forces acting on these genes. Characterization of these loci sets the stage for population-level work on the evolutionary ecology of Mhc in this species.