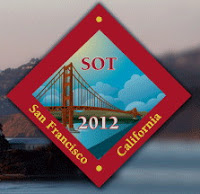 The MTF-1 transcription factor is considered to be a master regulator of zinc homoestasis. In an effort to develop novel molecular tools, we previously characterized a constitutively nuclear, dominant-negative zebrafish MTF-1/eGFP fusion protein (dnMTF-1). To test the in vivo effectiveness of the dnMTF-1, in vitro transcribed dnMTF-1 mRNA was microinjected into zebrafish embryos (2-cell stage) and transcriptomic profiling was performed using an Agilent 4 x 44K array on 28- and 36-hpf embryos. A total of 594 and 560 probes were identified as differentially expressed at 28 hpf and 36 hpf, respectively, with interesting overlaps between timepoints. There were several main categories of genes affected by the inhibition of MTF-1 signaling including novel observations in iron and heme homeostasis. Hepcidin, a peptide hormone that regulates iron homestasis, was not affected at 28 hpf but was significantly downregulated 2-fold at 36 hpf by inhibition of MTF-1 signaling. In contrast the major heme-binding protein, hemopexin, was significantly upregulated (3.7 and 2.6 fold) at each timepoint. To investigate the responsiveness of these two genes to an MTF-1 activator, 72 hpf zebrafish embryos were exposed to concentrations of Cd (50, 100, 150 µM) for 4 or 24 hours and gene expression was determined by real-time PCR. Interestingly, hemopexin was significantly downregulated by all Cd doses at both timepoints while hepcidin was significantly upregulated only after 24 hours of Cd exposure. 72 hpf zebrafish embryos were further exposed to hemin concentrations (50, 100, 150 µM) for 4 and 24 hours and gene expression was determined by real-time PCR. Both hepcidin and metallothionein were significantly upregulated after 4 hours of hemin exposure at the highest concentration, while hemopexin expression remained consistent. However after 24 hours of hemin exposure, hemopexin was significantly downregulated at the highest hemin concentration while hepcidin and metallothionein appeared unaffected. A search of the 3kb upstream of the transcription start site identified multiple MTF-1 binding sites within the proximal promoter of the hemopexin gene. The current observations suggest a novel role for MTF-1 as a transcriptional repressor of hemopexin in response to Cd or hemin exposure.