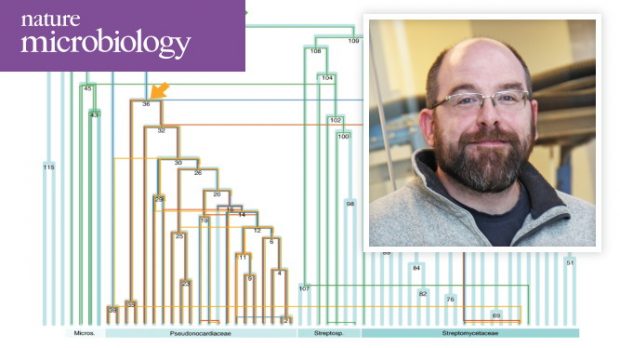 Glycopeptide antibiotics are produced by Actinobacteria through biosynthetic gene clusters that include genes supporting their regulation, synthesis, export and resistance. The chemical and biosynthetic diversities of glycopeptides are the product of an intricate evolutionary history. Extracting this history from genome sequences is difficult as conservation of the individual components of these gene clusters is variable and each component can have a different trajectory. We show that glycopeptide biosynthesis and resistance in Actinobacteria maps to approximately 150-400 million years ago. Phylogenetic reconciliation reveals that the precursors of glycopeptide biosynthesis are far older than other components, implying that these clusters arose from a pre-existing pool of genes. We find that resistance appeared contemporaneously with biosynthetic genes, raising the possibility that the mechanism of action of glycopeptides was a driver of diversification in these gene clusters. Our results put antibiotic biosynthesis and resistance into an evolutionary context and can guide the future discovery of compounds possessing new mechanisms of action, which are especially needed as the usefulness of the antibiotics available at present is imperilled by human activity.